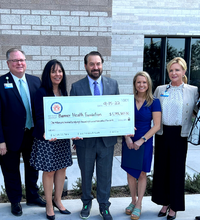 The Banner Health Foundation was recently awarded more than $1 million in grant funds from the office of the Arizona Attorney General to support two Banner Health programs aimed at combatting the opioid crisis in Arizona. The programs that will benefit are the Substance Use Telehealth for Arizona Rural Communities (STARC) program and the Family-Centered Neonatal Abstinence Syndrome Program (FC-NAS), receiving $599,479 and $599,328, respectively. The grants are part of a $573 million national settlement with one of the world’s largest consulting firms that was investigated for its alleged role in contributing to the opioid crisis across the state.

This funding will help Banner Health to meet the needs of pregnant and parenting women with substance use disorder and their babies born with neonatal abstinence syndrome, and to provide substance abuse care via telehealth in rural Arizona communities areas that are experiencing a provider shortage.

“Substance use disorder has continued to increase during the pandemic, and inequity exists in rural areas because there are fewer providers to serve this population,” said Dr. Maria Manriquez of the Banner - University Medicine Women's Institute, who oversees the STARC program, “The award Banner received from the Arizona Attorney General’s Office settlement will help develop and implement a telehealth addiction medicine program that will serve Maricopa and our rural counties.”

"Funding will also allow the Family-Centered Neonatal Abstinence Syndrome Care program to expand several hospitals throughout the Banner Health System over the next three years," said Lisa Grisham, RN director for the FC-NAS program. “This program is a bundle that maximizes nonpharmacologic interventions, utilizes parents as part of the treatment by having them room-in, simplifies the assessment of withdrawal symptoms by assessing the Infant’s ability to eat, sleep, and be consoled, and uses medication on an as-needed basis.” Piloted in 2017, the program has significantly reduced the amount of morphine needed to treat infants with NAS, shortened the time to discharge, and improved long-term health outcomes for both mother and baby.