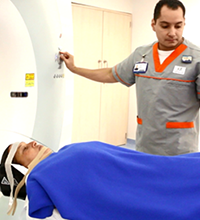 A woman who carried a gene mutation
known to cause early-onset Alzheimer’s
around the age of 40 did not develop
signs of the disease until her 70s.

Banner Alzheimer’s Institute (BAI) researchers recently identified how a rare gene protected a woman from developing Alzheimer’s disease even though she was at high risk. In the study published this year, a woman who carried a gene mutation known to cause early-onset Alzheimer’s around the age of 40 did not develop signs of the disease until her 70s. The findings suggest there may be a new way to treat or prevent the disease.

This study is just one of many that BAI has been involved in since launching their work in the mid-1990s. That’s when Dr. Eric Reiman, CEO for Banner Research, began studying the APOE gene and its role in increasing a person’s risk for developing Alzheimer’s disease.

There are three forms of the APOE gene – APOE ɛ2, APOE ɛ3 and APOE ɛ4. Everyone receives a copy of one of these three genes from each of their parents. Dr. Reiman’s pivotal study, which used a special type of brain imaging technology, found brain changes in healthy older adults who had two copies of the APOE ɛ4 gene compared to people who had no copies.

The study showed that healthy brains in people with the APOE ɛ4 gene had changes to energy use in the same regions of the brain as patients with dementia due to Alzheimer’s disease. This led Dr. Reiman and his colleagues to believe that changes in the brain can be measured years before the signs and symptoms of the disease are visible.

While studying the woman who did
not develop Alzheimer’s until her 70s,
they discovered she has two copies of
a rare form of the APOE gene known as
APOE3 Christchurch (APOE3ch).

BAI’s scientists have followed up this research with further studies about the effect different types of the APOE gene have on developing and preventing dementia due to Alzheimer’s disease.

While studying the woman who did not develop Alzheimer’s until her 70s, they discovered she has two copies of a rare form of the APOE gene known as APOE3 Christchurch (APOE3ch). Research into this gene found that the APOE3ch gene may reduce the ability of APOE to bind to certain sugars called heparin sulphate proteoglycans (HSPG). HSPG may play a role in how amyloid-beta plaques and tau tangles destroy the brain in Alzheimer’s disease. The research could lead to new drug or gene therapies to reduce APOE and HSPG binding as a way to treat or prevent Alzheimer’s disease.

In another study, a team of researchers led by BAI explored whether the APOE ɛ2 gene offers some protection against developing Alzheimer’s dementia. This study found that people with two copies of the APOE ɛ2 had an extremely low likelihood of developing Alzheimer’s. And people with two copies of APOE ɛ2, or one copy of ɛ2 and one copy of ɛ3, who did develop Alzheimer’s did so at an older age and had lower levels of amyloid-beta plaques and tau tangles in their brains. This research highlights the importance of future studies investigating how to replicate the protective effects of APOE ɛ2 through interventions such as gene editing or protein modification.

Banner Alzheimer’s Institute physicians and scientists continue to be thought leaders in other avenues for prevention research, such as prevention trials in people with two copies of the APOE ɛ4 gene who don’t yet have high levels of amyloid build up in their brains. Stay tuned to learn more about the vital work BAI experts are doing to end Alzheimer’s disease without losing another generation.