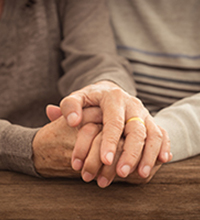 The study was published this September
in the scientific journal Movement Disorders.
Tom Beach, MD, Ph.D., Director of the Brain
and Body Donation Program at BSHRI,
was a lead researcher on the study.

New research out of Banner Sun Health Research Institute (BSHRI) shows for the first time a simple skin test can accurately identify Parkinson’s disease. This is a real breakthrough since there is currently no reliable test for the disease.

The study was published this September in the scientific journal Movement Disorders. Tom Beach, MD, Ph.D., Director of the Brain and Body Donation Program at BSHRI, was a lead researcher on the study.

“We conducted a blinded study of 50 skin samples provided by the Arizona Study of Aging and Neurodegenerative Disorders and the Brain and Body Donation Program based at Banner Sun Health Research Institute,” said Dr. Beach. “Half the skin samples came from people who had Parkinson’s disease and half came from people without neurologic disease. Researchers diagnosed 24 out of the 25 Parkinson’s disease patients accurately.” The study was carried out in coordination with Iowa State University.

The next step in this research is to study the skin test on living people with and without Parkinson’s disease. The first use of the new test could be in clinical trials where accurate diagnosis is key. There are several diseases that mimic the signs of Parkinson’s, making clinical trials complicated. Current diagnosis techniques rely on observing symptoms, a method that is only 60-75% accurate at early stages of the disease according to Dr. Beach.

“The ability to increase the accuracy of a Parkinson’s disease diagnosis for participation in clinical trials is a game changer,’ said Dr. Beach. “In addition, repeating the skin biopsy after a year or two of treatment may provide an indication of whether a study drug is working.”

People with Parkinson’s disease often undergo considerable stress during their first few years with the disease until doctors are able to make a definite diagnosis. Knowing a diagnosis earlier would reduce this stress and give people access to more therapies to manage their symptoms and their lives.

Dr. Beach was the first scientist in the world to propose using biopsies of body tissues other than the brain to diagnose Parkinson’s disease during life. Currently the only accurate diagnosis is a brain autopsy after death.

The Brain and Body Donation Program assists researchers not only in Banner Health and Arizona, but around the world. The program provides between 15,000 and 20,000 tissue samples each year to researchers from people who were studied by doctors during life and by pathologists after death.

“We offer the highest quality tissue available for this type of research,” said Dr. Beach. “These tissue samples are used to find chemical differences between diseased and non-diseased tissue. The differences can lead to the development of new diagnostic tests and new drug cures for a variety of diseases.”