Steve Hilton elected Chairman of the Board 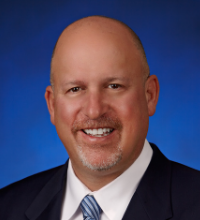 Steve Hilton is well-known in the Valley
business and philanthropic community,
having co-founded Scottsdale-based
Meritage Homes in 1985.

Steve is well-known in the Valley business and philanthropic community, having co-founded Scottsdale-based Meritage Homes in 1985 and overseeing its growth to become the seventh-largest public homebuilder in the United States today. He retired at the end of 2020 as Chairman and CEO and will continue to provide guidance and oversight as Executive Chairman of Meritage’s Board of Directors.

During Steve’s tenure, Meritage expanded across nine states through a series of acquisitions and start-up operations in more than 20 metropolitan markets coast to coast. He established Meritage as the leader in energy-efficient homebuilding since 2010 and has driven Meritage to deliver more than 130,000 homes and achieve a market capitalization in excess of $3.5 billion.

Steve and his wife, Suzi, have been longtime supporters of Banner Health. They were among the first donors to make a significant philanthropic investment to fuel the vision for the Banner Alzheimer’s Institute some 15 years ago. Suzi lost her mother to the disease in 2012.

“Banner is the largest and most innovative hospital system in Arizona and its mission and values match up to my own,” says Steve. “I can’t think of a better way to invest my time and financial resources to advance medical care in my home state.”

With this career transition, Steve feels 2021 is the perfect time to devote more of his time and energy to their family’s philanthropic interests, Banner Health Foundation being chief among them. “I am very excited to be working with a such a dedicated Board of Directors and a strong Foundation staff. We will continue to focus on growing our fundraising efforts to serve Banner Health and to be great ambassadors for Banner in the community,” Steve says, adding “I hope I can bring some experiences from my 35 years in business to the Foundation to help us achieve our objectives.”

Residents of north Scottsdale, Steve and Suzi have four children: Shari, 28, Eva, 24, Sophie, 19, and Harrison, 16, along with two dogs, Smoochy and Blaze.