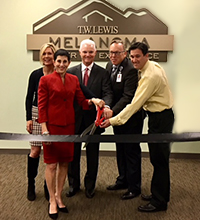 “We are so proud to have achieved our fundraising goal in just eight months’ time, accelerating the establishment of this important center of excellence for the benefit of those facing a Melanoma diagnosis in our state and region,” said Andy Kramer Petersen, Banner Health Foundation’s President & CEO. “Tom and Jan’s generous gift and their leadership were critical in encouraging other individual donors, foundations and companies to join with us.”

The gift is highly personal for Tom Lewis, founder and CEO of the Phoenix-based real estate investment company T.W. Lewis Company and the T.W. Lewis Foundation. Lewis lost his father after a 10-year battle with Melanoma at the age of 66.

The sunniest American state, Arizona has the highest Melanoma death rate in the country, making it the ideal location from which to wage war on this killer. Nearly 90 percent of Melanoma cases are related to UV exposure, according to the Skin Cancer Foundation.

Melanoma is the sixth-most common cancer in the United States and the only one whose incidence is increasing; cases of the disease have risen rapidly over the past 30 years, according to the American Cancer Society.

Melanoma often is misdiagnosed as a non-malignant skin condition, resulting in long delays before diagnosis. As Melanoma progresses, it becomes increasingly devastating and deadly. The five-year survival rate for those diagnosed with Stage IV Melanoma ranges from 15 to 20 percent. Those who do survive are much more likely than the general population to develop additional Melanomas.

Guests at the ribbon-cutting were introduced to Dr. Mark Gimbel, the newly appointed Medical Director of the T.W. Lewis Melanoma Center of Excellence. They also learned about one of the early accomplishments made possible by their support: the opening of four new Melanoma clinical trials, with three already underway. Clinical trials foster the discovery of new treatments as well as new ways to detect, diagnose, and reduce the risk of disease. In addition to helping to improve and advance medical care, clinical trials give patients access—right here in Arizona—to the latest and most promising treatments that may not yet be widely available.

Also in progress is a comprehensive community outreach and education program focusing on sun safety, personal and family risk factors, and Melanoma prevention.