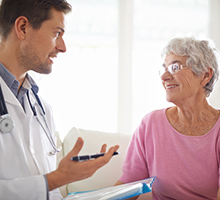 The new blood test can detect Alzheimer’s
as accurately as more expensive
and invasive tests.

An international team of researchers, including scientists from the Banner Alzheimer’s Institute and Banner Sun Health Research Institute here in Arizona, Lund University in Sweden, the drugmaker Eli Lilly and others, have identified a new blood test showing remarkable promise in detecting Alzheimer’s disease as early as two decades before symptoms appear.

The test can detect Alzheimer’s as accurately as more expensive and invasive tests and it can differentiate between Alzheimer’s and other conditions that cause dementia. It does so by detecting early changes in two specific proteins that cause the majority of the brain damage that leads to Alzheimer’s symptoms such as memory loss, thinking problems and behavior issues: tau and amyloid. These protein-rich plaques and tangles degrade the brain beyond repair.

One particular form of the tau protein known as p-tau217 clusters together to create tangles within neurons and was found to be the one of the earliest to show changes. Recently published in The Journal of the American Medical Association and presented at the Alzheimer’s Association International Conference, their research found that p-tau217 levels were about sevenfold higher in people with Alzheimer’s. They also found that in people carrying a gene associated with the disease, p-tau217 levels began to increase 20 years before signs of cognitive impairment, as plaques and tangles begin to slowly build up within the brain.

Until recently, a diagnosis of Alzheimer’s could only be confirmed via costly, invasive, and less available methods like PET brain imaging and cerebrospinal fluid (CSF) biomarkers obtained through a lumbar puncture.

Researchers estimate the blood test could be available for clinical use in a few years and could prove to be an inexpensive and widely available way to distinguish Alzheimer’s disease from other diseases that cause dementia 98% of the time.

Banner’s Brain and Body Donation program, as well as the Colombia kindred involved in the Institute’s Alzheimer’s Prevention Initiative research efforts, were both involved in this study.

“Blood tests like this have the potential to revolutionize Alzheimer’s research, treatment and prevention trials, and clinical care,” says Dr. Eric Reiman, Executive Director the Banner Alzheimer’s Institute and CEO for Banner Research. “I am excited and energized for Banner to be part of this important research.”