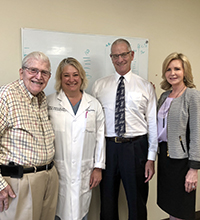 The Banner Health Foundation is thrilled to announce that Arizona homebuilder, businessman and philanthropist Mr. Ira A. Fulton has endowed the Ira A. Fulton Chair in Bariatric Surgery and Metabolic Disorders with a $2 million charitable gift. This is the first endowed chair to be established at Banner – University Medical Center Phoenix, part of the academic medical enterprise born from the 2015 merger of Banner Health and the University of Arizona Health Network.

Robin P. Blackstone, MD, FACS, FASMBS, has been appointed to the Fulton Chair. As Chief of Bariatric and Metabolic Surgery at Banner – University Medical Center Phoenix, Dr. Blackstone leads the multidisciplinary team at the Obesity and Bariatric Surgery Center. Dr. Blackstone has performed approximately 5,000 bariatric surgeries over 15 years since first establishing her practice, one of the first institutions in the United States to be recognized as a Center of Excellence by the American Society of Metabolic and Bariatric Surgery.

In 2015, Dr. Blackstone moved her practice to Banner – University Medical Center Phoenix to integrate patient care, state-of-the-art research and teaching into the Diabetes and Endocrine Institute, part of Banner – University Medicine. The Institute is dedicated to combating the most complex chronic health conditions: diseases and disorders of the endocrine system, including obesity, with leading-edge, cost-effective and highly coordinated clinical care and scientific research.

Dr. Blackstone is the first woman to have served as President of the American Society for Metabolic and Bariatric Surgery, the largest association in the world dedicated to the specialty. During her tenure as President, she helped to establish one standard for bariatric surgery: the Metabolic and Bariatric Surgery Accreditation and Quality Improvement Program. In February 2015, Dr. Blackstone became a certified diplomat of the American Board of Obesity Medicine.

An Expression of Gratitude

The Fulton Chair is the most thoughtful expression of gratitude to Dr. Blackstone, who, through her work, has improved the health and longevity of thousands of Arizonans—including Mr. Fulton, who came to her for bariatric surgery many years ago.

“Dr. Blackstone saved my life,” says Mr. Fulton, who struggled with obesity and its associated medical issues for many years before seeking treatment. “Because of her, I was able to go on with my life and business, and to be here today, able to give more money away to deserving programs and causes like this.”

“I have been privileged to know and work with Ira for almost 16 years, he is a man who always tries to maximize his own efforts in regard to any project, including his own health,” recalls Dr. Blackstone. “Ira has lived a full life with the hallmarks of generosity and a true devotion to education. He has now translated that passion into the academic medical mission of Banner – University Medicine. This gift is going to allow us to not only provide excellent patient care, but to better understand the disease of obesity through the knowledge we gain as an academic medical center, and to have a positive impact on generations of people to come.”

Endowed chairs are one of the highest forms of recognition for physicians. These prestigious appointments help to attract, reward and retain distinguished faculty of national and international reputation. Mr. Fulton hopes his gift inspires others to support endowed chairs and other advancements in medicine in Arizona. Likewise, the Banner – University Medicine Division’s leadership hopes for the same kind of endowed chair for its many other Institutes and Centers specializing in Transplant, Digestive, Heart, Women’s, Lung, Neuroscience, Sleep Disorders, Endocrine, Orthopedic and Spine, Head and Neck, Trauma and Critical Care, Rehabilitation Wound and Reconstruction, and Urology.

Mr. Fulton has been building homes in the Valley for more than 40 years through his well-known company, Fulton Homes. A native of Tempe and a proud ASU Sun Devil, Mr. Fulton has grown the company that bears his name from its early days of building fewer than 100 homes a year to building more than 2,000 homes annually today.

Volume has never been his motivating factor, says Mr. Fulton. Fulton Homes is founded on the principle of serving the needs of homeowners. And, as a show of the company’s commitment to the community, Fulton Homes donates more than 60 percent of its profits to worthy causes.

Mr. Fulton says he finds the most gratification in “developing people,” not homes. Through the Fulton Family Foundation, he sponsors the education of hundreds of Native American students. He also provided the means for 50 Mongolian and Cambodian students to attend Brigham Young University’s Hawaii Campus and has supported universities, students, and nonprofit organizations too numerous to list.

A generous Arizona philanthropist, the ASU College of Engineering bears his name and the Mary Lou Fulton College of Education is named for his beloved wife. Several schools and buildings at Brigham Young University also bear the Fulton name.

Throughout his life, Mr. Fulton has never viewed himself as competing with others. Regardless of occupation, his sole objective has been to be better than his own past self. With quality and integrity as his watchwords, he has worked tirelessly to present families with homes that “You’re Proud to Own, and We’re Proud to Build.”